Things to do in Lucerne 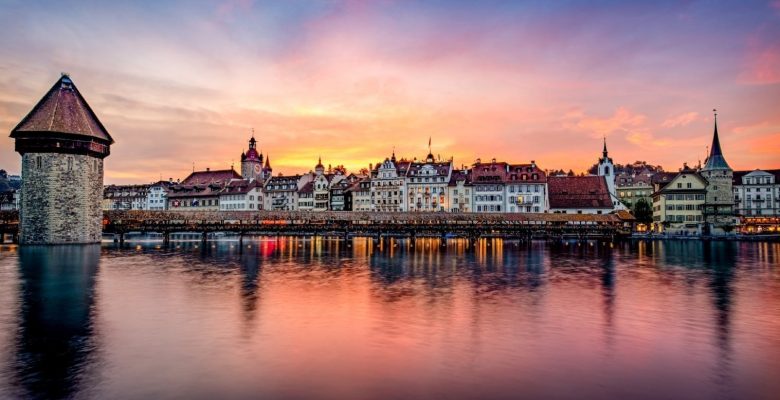 Discover "Things to do in Lucerne", it's a fantastic idea for your holidays, which we have in the Central Switzerland section and which the Swissferien team advises you not to miss.

A visit to Lucerne is a must if you are a lover of small, charming towns. Without doubt, Lucerne falls into this category, where you could find other cities of similar size to Colmar in French Alsace.

Located on the western shore of Lake Lucerne, it is one of Switzerland’s landmarks, with its famous Chapel Bridge spanning the Reuss.

As we mentioned before, millions of people visit Lucerne, which makes Lucerne one of the most visited cities in Europe because of the Chapel Bridge full of flowers, the water tower, the swans, the lake, the Jesuit Church and the terraces marking the riverbank.

But Lucerne has many more attractions such as its rich architectural heritage, full of historic buildings, bridges and squares, each one more romantic and atmospheric than the last.

In the following lines we will describe in detail what to do in Lucerne to make the most of your visit. One day may be enough, but we recommend two days to enjoy it in peace and quiet, without hurry or stress. If you are planning to climb one of its famous peaks, such as Pilatus or the Rigi, with one of the boats that sail the lake, reserve three days to make your experience unforgettable.

Whether if you park your car in the car park located in the centre of Lucerne or arrive by train, you can see the magnificent building of the KKL Luzern am See. It was designed by the famous architect Jean Nouvel and it is one of the cultural and architectural icons of the new Lucerne. Originally the building was intended to be located in the middle of the lake but due to several issues related to the maritime traffic the final location is near the shore. As night falls, its spectacularity increases exponentially and it is worthy of the best night photography.

Mark Twain said once that it is “the saddest and most moving piece of rock in the world”, and the truth is that many visitors agree that the monument conveys much. It was carved into the rock itself in 1821 to honour the Swiss soldiers who died when the Tuileries were captured in 1792 while defending King Louis XVI.

The largest museum in Europe dedicated to transport is a must. Located on the outskirts of the city, in the Rue du Lido, Lucerne’s public baths, it is a fantastic visit for young and old. The entrance is a wonderful mosaic of geometrically arranged motorway signs that invite you to think about the attractions inside, such as the planetarium, an imax cinema or the Swissarena.

The collection of objects and vehicles is absolutely magnificent: vintage cars and airplanes, bicycles and motorcycles, helicopters as well as all kinds of trains and locomotives that have a great tradition in Switzerland. There is no shortage of ships and the part dedicated to the conquest of space, and undoubtedly one of the most sought-after attractions are the F1 simulators.

If you continue walking the streets and alleys of the historic centre, you will get to a huge stone wall. This is the Museggmauer quarter, bounded by its medieval wall and the seven towers which are still perfectly preserved. It is a very quiet area, ideal for hiking and not many tourists. You can climb three of these towers, including the bell tower which is the oldest of the city, dated in 1535.

Lucerne is known mainly for its covered wooden bridge which is the oldest in Europe (1333) and the second of the continent. The bridge spans the Reuss river and connects the modern part of the city with the old town. Its exterior is magnificent, full of flowers and with swans swimming around it. The view from the tower of water (Wasserturm) and the twin towers of the baroque Jesuit church or the stylish symmetrical bell towers of the Hofkirche, depending on where you look at the bridge, rounds off a picture that will remain in your memory.

If it is beautiful from outside, it is another unique experience to cross it under your roof. One hundred and twelve pictures on wood, hung in triangles along the bridge, show us the history of Lucerne and the origin of Switzerland. The paintings are copies of the originals since the paintings and the bridge went up in flames on a fateful August night in 1993. Aware of the tragedy, it took the authorities only eight months to rebuild it and today it looks as good as the old one.

If you continue on the left bank of the bridge (southern access) you will pass beautiful terraces and above all the magnificent Jesuit church, the first large baroque church in Switzerland. A bit further you will arrive to another covered bridge, the Weed Bridge, which houses Kaspar Meglinger’s work related to death as the main topic. In the middle of the bridge there is a beautiful chapel.

Via the Chapel Bridge or the Spreuer Bridge we reach the old town of Lucerne. The cobbled streets and especially the beautiful medieval squares invite you to dream. The most beautiful ones are the Wine and Corn Market where you can admire beautiful buildings from the 16th century, especially magnificent frescoes on their facades. At the Weinmarkt you can visit an old pharmacy dated in 1530.

Beside the Lion Monument you will find a small museum that brings you from a tropical beach twenty million years ago, thanks to its 32 glacier basins, to the recent ice age twenty thousand years ago. It was discovered in 1872 and offers a unique opportunity to relive prehistory by yourself. There is also a magnificent labyrinth of mirrors built in 1896 for the World Exhibition in Geneva. Do not miss it!

In the Lion Place, not far away from the famous monument, there is a museum dedicated to a single work of the painter Edouard Castres. It is a circular canvas painting measuring 112 x 10 metres and weighing about one tonne. The subject of the painting is the retreat of the French army to the Swiss border after the defeat at Belfort in 1871 in the Franco-Prussian War. Even if you are not an art lover it is worth entering and marvelling at the realism of the painting, which is supported by visual and sound effects to achieve complete immersion in the historical reality being treated.

It is one of the most popular options for tourists visiting Lucerne. Several boats depart from the pier next to the emblematic building of Jean Nouvel during the day to admire the beauty of the lake and the mountains flanking it. It is also possible to combine the pleasure of navigation with the usefulness of reaching the lake stations to climb the famous Rigi or Pilate mountains.

Lucerne doesn’t need any external sights to be a must, but it still has some of the most famous sightseeing tours in Switzerland, just a few kilometres from the historic centre. The boats, some of them steamboats, set off from the pier for a wonderful trip across the lake to one of the mountains that plunge into the lake. One of them is the famous Pilatus, famous as the rack railway with the wildest gradient in the world, a maximum difference in altitude of 48%. Arriving at the station at an altitude of over 2’132 metres, we enjoy the pleasure of watching the trains making their arduous ascent or the 360º view of many lakes as well as the Alps of the Bernese Oberland.

The Rigi rack railway is another major excursion on Lake Lucerne. The ride from Vitznau is a pleasure, with views of the lake, the village church, the green meadows and the flower-filled chalets in the surrounding area. From this point, you will see great peaks and, once you reach the top at 1797 metres, you will have a magnificent 360° view of the lakes of Central Switzerland and the most famous Alpine peaks. As if that is not enough, you can go down to the Rigi Kaltbad middle station and enjoy the fantastic wellness area designed by the famous architect Mario Botta.

Trip to the Bürgenstock

Much less well known is the excursion to Bürgenstock, from where, after a short half-hour walk, a spectacular rock path leads along the rock that plunges into the lake, which, as the name suggests, offers an incredible view of the lake or of the Rigi itself.

The little walk has an unexpected reward – the Hammetswand outdoor lift, the highest of its kind in Europe. In just one minute you will reach the top station where you can enjoy a wonderful landscape and an incredible view of the lift.

Where can you swim in the lake?

You should not forget to take a dip in Lake Lucerne since in summer time the temperatures can be quite high in this beautiful city. The most famous is the Lido, which leaves Lucerne for Weggis and is very close to the Museum of Transport. You can pay admission to the facilities and enjoy their comfort, although it can be crowded in summer or you can choose to stay in the park area. This second option, although free, is rather uncomfortable as there is no access to the shore and there are many sharp stones in the water, which make bathing very painful. There are more authentic and less crowded options such as the Seebad beach, very close to the casino and the one on the other side of Lucerne, which runs along the Alpenquai.

But our advice, if you do not mind moving out of the city, is to enjoy the lake visiting the public baths of Brunnen and Weggis. Two wonderful places where to spend a day at the beach.

Charming hotels with a view in Lucerne

Before we finish this article, we would like to show you a selection of hotels that are characterized by their fantastic views and their good quality. Both for vacation or for ther for a weekend, each of the below hotels are totally recommended.

This rococo-style hotel has an impressive view of the canton and of the city of Lucerne itself, including the Chapel Bridge. You may not want to feel like Louis XIV in one of his rooms, but just for breakfast on this terrace with this view over Lucerne is worth it. Apart form that, if you do not plan to stay here overnight you can get there on foot or by funicular and enjoy the view as well.

A hotel where Tolstoy, Roger Moore, Mark Twain, Richard Wagner or Anastasia stayed cannot be ugly. One of Lucerne’s lakeside classics, en vogue since 1845. Don’t miss its neo-renaissance façade, which is illuminated at night.

It is only a three star, but it stands in front of one of the most photographed places in the world: the Chapel Bridge. The views are unforgettable. Your best chance to experience the medieval magic of Lucerne.

The hotel is actually not in Lucerne, but in Ennetbürgen, 20 km away, but some time ago the photos of its pool became viral in social media. Who would not like to swim in this pool with a view of Lake Lucerne?

Another classic hotel in Lucerne. Pioneers of tourism in Switzerland and around the world. Its location by the lake and the church of St. Leodogar is enviable. In front of the hotel you can admire the lake, the “seebad” of Lucerne and a magnificent view of the city and Mount Pilatus.