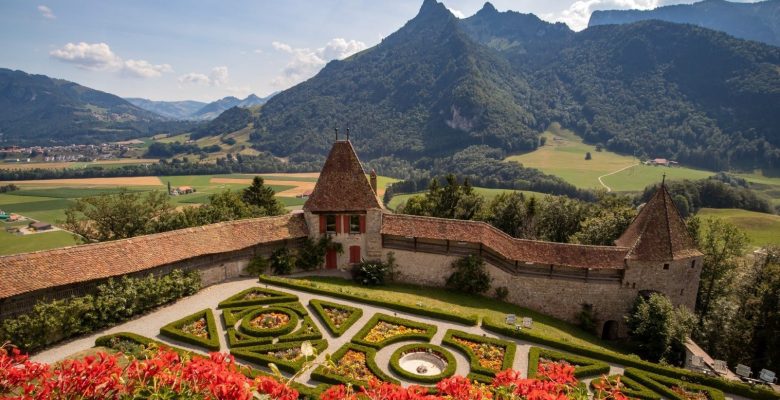 Discover "Castle of Gruyères: medieval castle in Switzerland", it's a fantastic idea for your holidays, which we have in the Swiss Experiences section and which the Swissferien team advises you not to miss.

Castle of Gruyères is one of the most beautiful castles in Switzerland and one of our favourite destinations. One could say that it is one of the top 3 and that it challenges this honour with the fortress complex of Bellinzona or the romantic castle of Chillon in Montreux.

If Chillon is distinguished by its location on the lake of Geneva, Gruyères Castle is distinguished by the fact that it is situated on a hill dominating a medieval town and by the wonderful backdrop of the mountains of the Fribourg Pre-Alps, which serve as a backdrop for the magnificent castle.

Its medieval beauty and charm make it one of the most visited places in Switzerland.

A little history about the Castle of Gruyères

The construction of the castle of Gruyères is not quite clear yet but it seems to be around the 11th century. In the centuries that followed, it was owned by the Counts of Gruyères until it finally fell into disrepair in the 16th century and passed into the hands of Fribourg government for two and a half centuries until the end of the 18th century, and later into the possession of other families until a foundation was entrusted with its preservation and management in 1993.

One of the most important historical moments occurred in 1476, when Count Ludwig took part in the famous Battle of Morat, which marked the defeat of Charles the Bold against the Confederates.

The modernisation and reform of the castle dates from this period, and the most relevant innovations include the construction of the esplanade and the chapel and the installation of the spiral staircase.

The castle developed from a rough and sober appearance like the fortress for which it was intended, to a sweeter and more palatial image which made it one of the favourite places of the painters of the Romantic period in the second half of the 19th century.

A visit to the castle of Gruyères

After the parking spaces, a short and steep road leads up to the castle wall, from where you will have a beautiful view of the region. If you also cross the north tower, you can admire a nice paved walk with a fantastic panoramic view.

From the city wall, a vaulted door leads you to the famous medieval street of Gruyères, which is plenty of terraces and restaurants serving delicious and tempting Savoyard fondues.

You will also find many people taking pictures in front of the beautiful flower fountain in the middle of the street. If you want to see the centre of Gruyères without people, you must not despair. Just wait until nine o’clock in the evening so that you won’t meet anybody. If you are in the vicinity, don’t miss the opportunity to take some nice shots at the last minute.

To get to the castle, you only have to walk a little further, past the restaurant Le Chalet and then the museums Tibetan and S.R. Giger.

Once you have paid the entrance fee, before entering the interior, you can first take a tour of the courtyard and the castle chapel.

In this floor you will find the guard room, the old arsenal or the kitchen, where there is a fireplace, the oven for baking bread and the collection of pots or the hooks for hanging the boilers stand out.

It is also worth mentioning that the spiral staircase connects the three floors of the castle.

On this floor we can admire various rooms with paintings, murals, tapestries and period furniture, such as the Burgundy Room or the Room of the Counts of Gruyères, all particularly richly decorated and furnished.

Perhaps the most authentic is the Room of the Beautiful Lucia, in honour of the girl of humble origins who fall in love with the Count of Gruyères.

There are several important rooms such as the Knights’ Hall, the Hunting Hall or the Hall with furniture dated in times of Louis XV.

There is also a room where an exhibition of fantastic art can be seen under the common denominator Castle of Gruyères.

One of the most anticipated moments when visiting Gruyères Castle is the panoramic view of the gardens from the balcony.

This small terrace can be entered from the room where the fantastic paintings are hanging and from here you can admire the small French style garden flanked by the east wall and two towers.

Beyond the castle, the view sweeps over the mountains, including the summit of the Kaiseregg (2,185 m).

Views of the castle of Gruyères

If you want to have the complete photo collection of the castle, we recommend you to take the car and drive along the road from Broc to Gruyères or the one coming out of the Migros supermarket on the right.

We recommend you this visit during the afternoon when the sun’s rays enhance the beauty of this magnificent castle.

Prices and timetables 2020 Castle of Gruyères

The castle is located in the village of the same name, half an hour south of Freiburg. There are three parking lots where you can park your car.