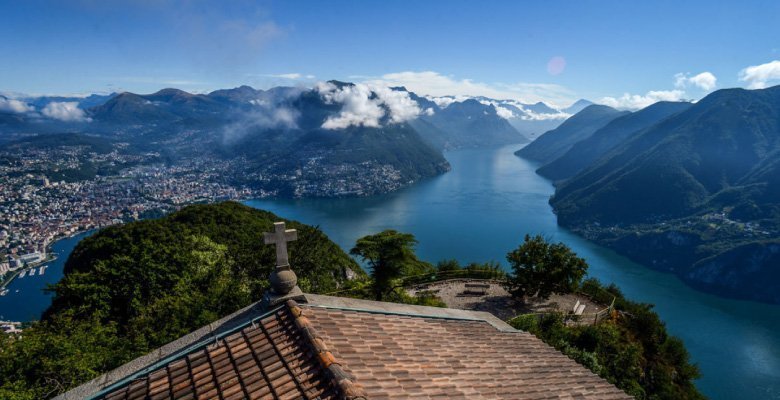 Discover "Monte San Salvatore", it is a fantastic idea for your holidays in the canton of Ticino that we advise you in Swissferien.

Monte San Salvatore is the most emblematic mountain of Lugano despite its low altitude of 912 metres, which is nevertheless very pleasant on hot summer days.

And we say emblematic because its location and shape are very reminiscent of Rio de Janeiro’s famous “Sugar Loaf Mountain“, one of the icons of world tourism.

The mountain is part of the Lepontine Alps and the Bay of Lugano and if you want to admire its famous silhouette, you must go to the other end of Lugano to the district of Cassarate and next to the other mountain of Lugano, Monte Brè. From there you can contemplate the typical postcard image of the city with the gate of a small park overlooking the lake and with a fantastic panoramic view of Monte San Salvatore.

How to arrive at Monte San Salvatore

To reach the funicular leading to the top, you need to go to the Paradiso district, where the valley station is located. There is a small pay car park where you can leave your car.

The red funicular saves the 600 metres of bumps in just 12 minutes and has an intermediate station called Pazallo, located at 490 metres above sea level.

During the short journey you can already enjoy the views of Lugano and its bay.

Before becoming a tourist landmark, Mount San Salvatore had a mystical origin since the beginning of the 13th century when it became a place of pilgrimage, especially to the church on the summit.

Legend has it that Jesus Christ stopped at the top of San Salvatore on his ascent to heaven, hence the name of the mountain.

Legends and romance aside, you can emulate the Ascension of Jesus Christ and enjoy an unforgettable panorama of the lake, thanks to the red funicular railway that has been operating since 1890.

What to see in Mount San Salvatore

When you leave the top station of the funicular and next to the Vetta restaurant, you will find the first of the two viewpoints of Monte San Salvatore. This is the Capodoro Terrace, from which we can enjoy a splendid view of the southernmost part of the lake, towards Melide and the road that crosses the lake.

After admiring the views from this first vantage point, you can go to the church of San Salvatore. Thanks to the temporary exhibitions arranged along the way, the walk becomes very pleasant.

Today we find dozens of tourist posters from this period illustrating some of the country’s great icons, such as Zermatt, Bad Ragaz, Mount Pilatus, St.Moritz or the Lucerne Chapel Bridge.

In less than ten minutes you can reach the small church of San Salvatore, an oasis of peace surrounded by pine trees and where it sometimes seems that you are in a small Mediterranean hill. From here you will already have a view of the north of the lake but we recommend you to climb the stairs to the church terrace.

From here you have a 360ºC views of the lake. The panoramic view is outstanding the best in the region and includes the whole bay of Lugano, the peaks of the lake such as Monte Brè, Monte Generoso, Monte San Giorgio, Monte Lema or Monte Tamaro.

To the west, the view extends to the Valais Alps and Monte Rosa. If you go up at sunset on a windy day with some clouds you will take some pictures worth exposing.

The photo of the church cross with the whole lake and the mountains at its feet is memorable.

If you not only enjoy the views but are also one of those who like to hike and discover new vantage points, you have many hiking options. One of them is the well-known journey from the intermediate station Pazallo (490 m) to the beautiful small town of Morcote. A journey of about three hours through a paradisiacal landscape.