Schilthorn: the spectacular balcony of the Alps 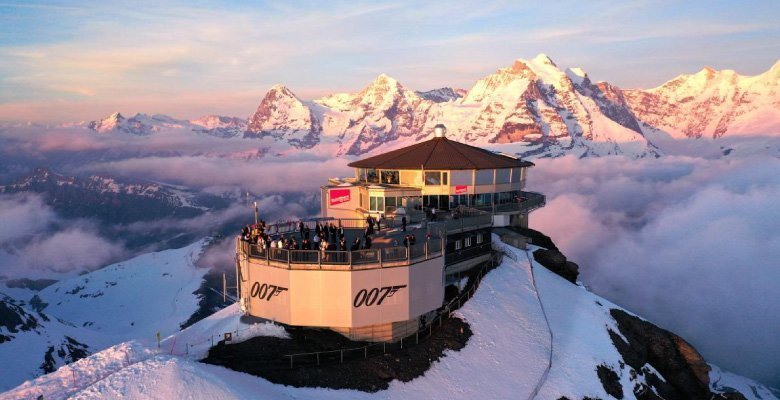 Discover "Schilthorn: the spectacular balcony of the Alps", it is a fantastic idea for your holidays in the canton of Bern that we advise you in Swissferien.

The Schilthorn is overshadowed by the well-deserved fame of the Jungfrau Railway ride, but we assure you that a cable car ride up the Schilthorn or Piz Gloria is one of the highlights of a holiday in Switzerland.

There are so many things to do that you need to book a whole day to visit, because it’s not just about seeing the incredible view from the summit, but also enjoying the impressive view from the valley station in Birg or reliving the most famous scenes from a James Bond film.

Trip to the Schilthorn

To visit the Schilthorn, you have to drive to Lauterbrunnen and continue on the road to Stechelberg. You can park your car in the car park next to the cable car valley station.

From here a large cable car takes you to the summit, covering a difference in altitude of more than 2,000 metres.

In addition to the departure and arrival stations, there are three other intermediate stations: Gimmelwald, Mürren and Birg. At these stations you have to change cable cars to get to the different mountain routes. The ride takes about 35 minutes and is very beautiful.

As soon as you leave Stechelberg, the cable car climbs steeply upwards between the walls of the Lauterbrunnen Valley. The aerial view of the cable car leaves no one indifferent and you see the Gimmelwald meadows and the charming alpine village of Mürren pass by under your feet. Once you reach your destination, you can feel yourself touching the sky and the great peaks of the eternal snow.

Piz Gloria: on the summit of the Schilthorn

It is difficult to describe the magnificent view of the Alps from here. On the Sky View platform you can see the Eiger, Mönch and Jungfrau up close. Whether you come in summer or winter, the view is unforgettable.

On the other side, you can see Mont Blanc itself and even the Black Forest in Germany, which is a privileged vantage point from which to see the most famous peaks of the Alps. Highly recommended!

You can also go to the Piz Gloria View, a circular platform that offers a spectacular view of the building that houses the restaurant and the Bond Museum.

There are various mini-attractions there that put you in the role of the famous spy James Bond. They highlight a helicopter in which it is possible to simulate a climb to Piz Gloria; a screen on which photo montages can be made with your face and a character from the film; or a bobsled in which it is possible to climb and re-enact one of the most exciting scenes from the film.

If you don’t know the film, you can go to the Bond cinema Schilthorn where you can enjoy the most spectacular scenes of the film, shot on Piz Gloria.

Also, if you are a fan of James Bond and his films you can visit the 007 Walk of Fame, a walk outside the Schilthorn where you can see the cast and crew of the film and their footsteps.

Another highlight of Piz Gloria is the 360º Piz Gloria restaurant, which rotates on its own axis and gives you the opportunity to view more than 200 peaks. It is simply amazing.

The intermediate station in Birg

Birg is a ski resort with slopes in winter, but in summer the excitement continues thanks to new and spectacular facilities such as the Skyline Walk, a platform suspended from nowhere that offers an impressive height difference and fantastic views of the Eiger, Mönch and Jungfrau.

As it is complicated to explain in words, it is best to check it yourself with these pictures.

If you thought the strong emotions were over, you’ll love going to the Thrill Walk, a 200-metre metal walkway that also hangs out of the void and is attached to the rock.

The feeling of vertigo is overwhelming but the views are wonderful and the experience is unforgettable.

With so much excitement you’re bound to get hungry, but you can satisfy your appetite at Bistro Birg with sensational views.

This is the Schilthorn-Piz Gloria, a cumulus of sensations that are hard to beat at the peak of Switzerland’s greatest natural attractions. And if you still have time, you can visit Mürren, the pretty mountain village where no cars drive and where the houses compete for the most beautiful gardens, perfectly matching the Alpine panorama and the Swiss flag.

How do you reach the Schilthorn?

The fastest option is to travel to the Stechelberg cable car station, past Lauterbrunnen and the famous Trummelbach Falls.

If you prefer using the public transportation, we recommend that you take the train from Interlaken to Lauterbrunnen and catch a bus there which will drop you off at the car park mentioned above.