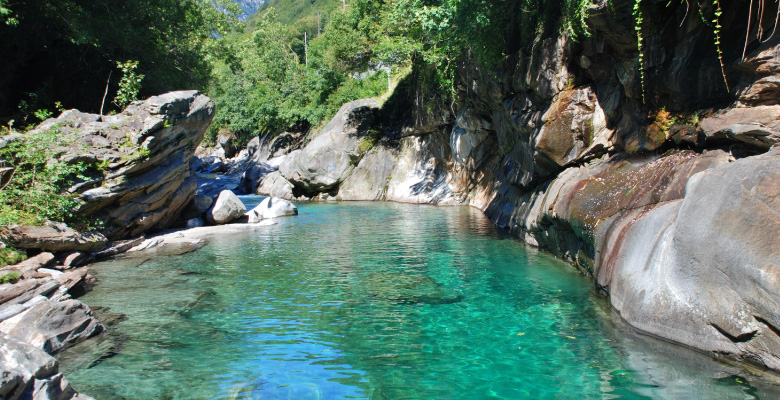 Discover "Verzasca valley", it is a fantastic idea for your holidays in the canton of Ticino that we advise you in Swissferien.

Verzasca is the name of the most famous valley in the canton of Ticino. A valley of overwhelming beauty with a vegetation that moves between a pre-Alpine and Mediterranean region. It is the ideal destination for those looking for a Mediterranean holiday without leaving the country. 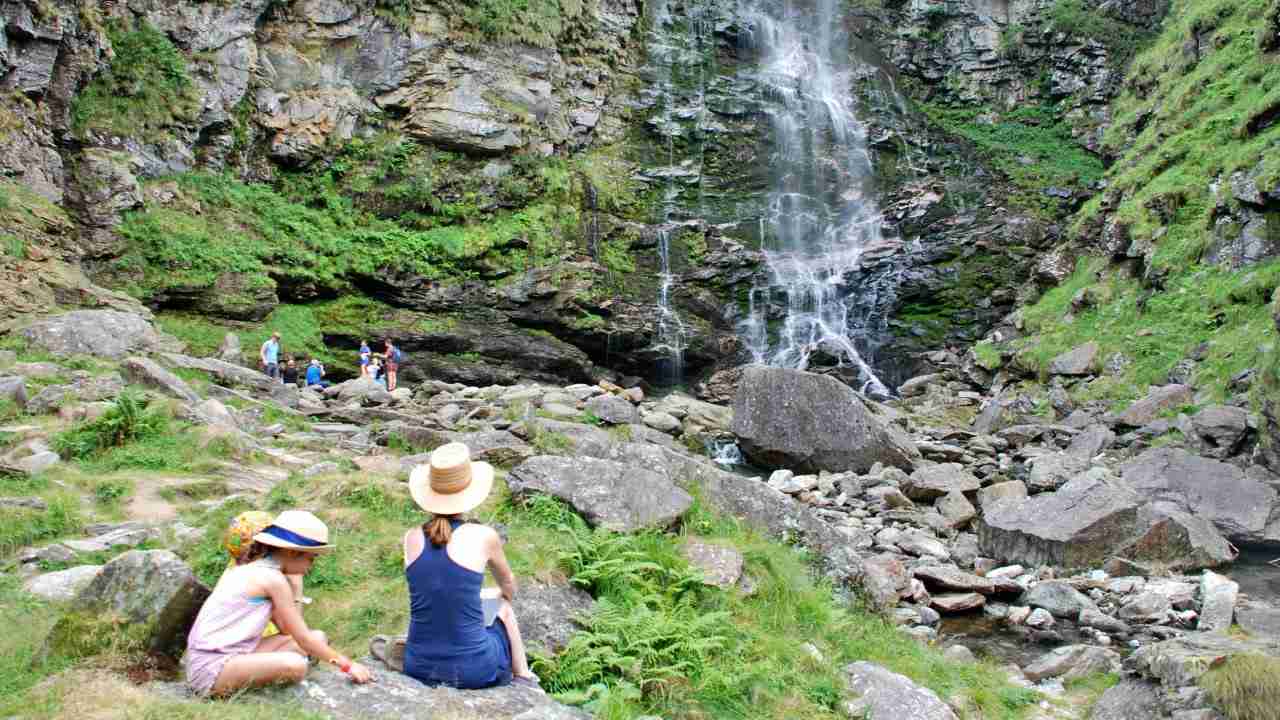 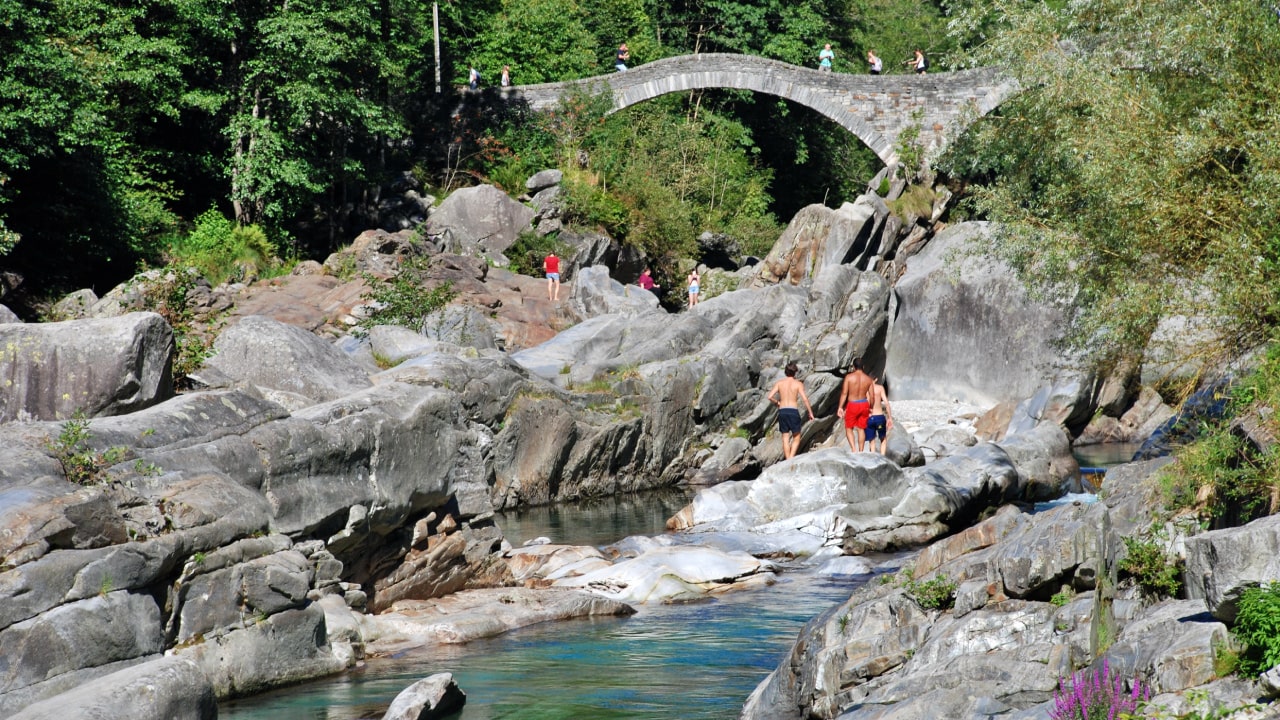 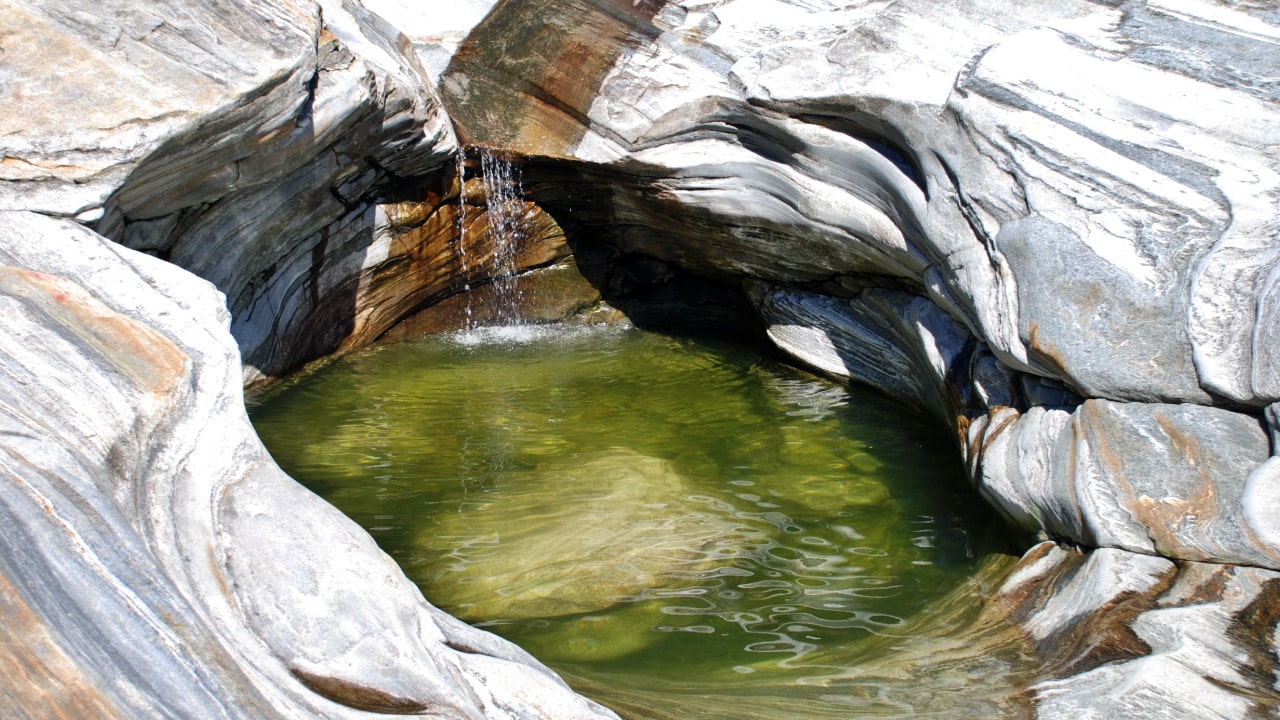 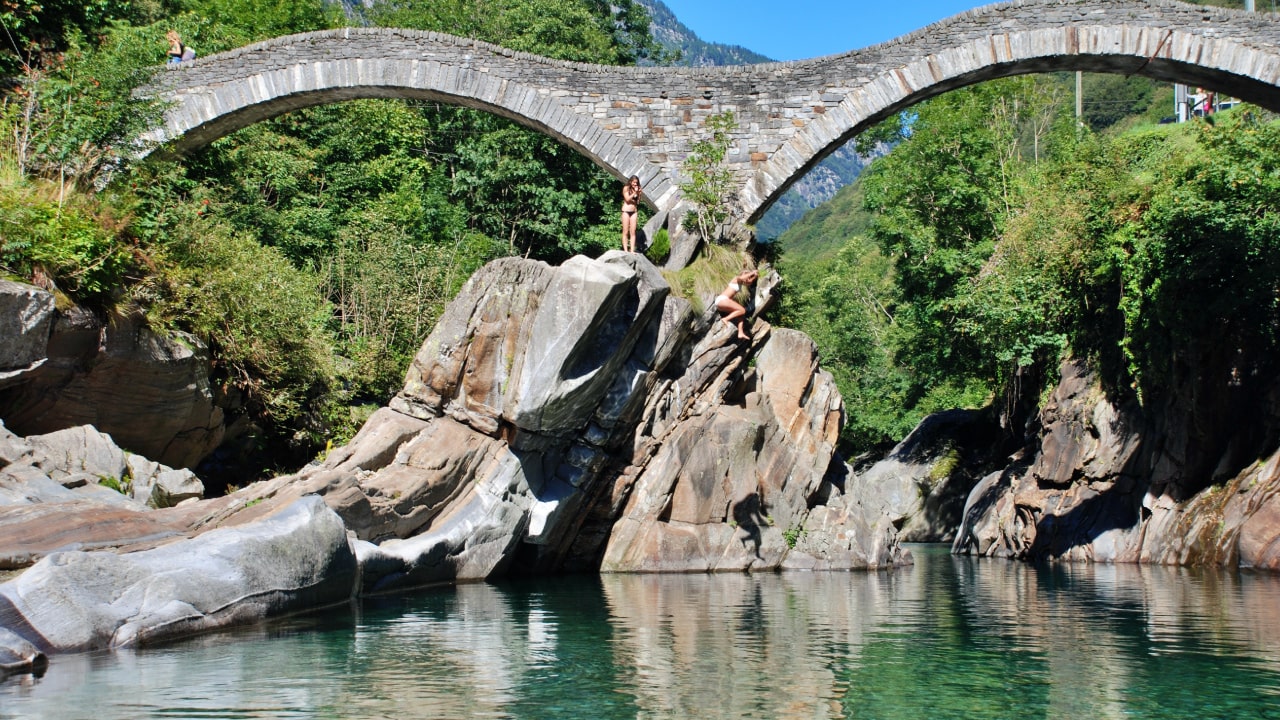 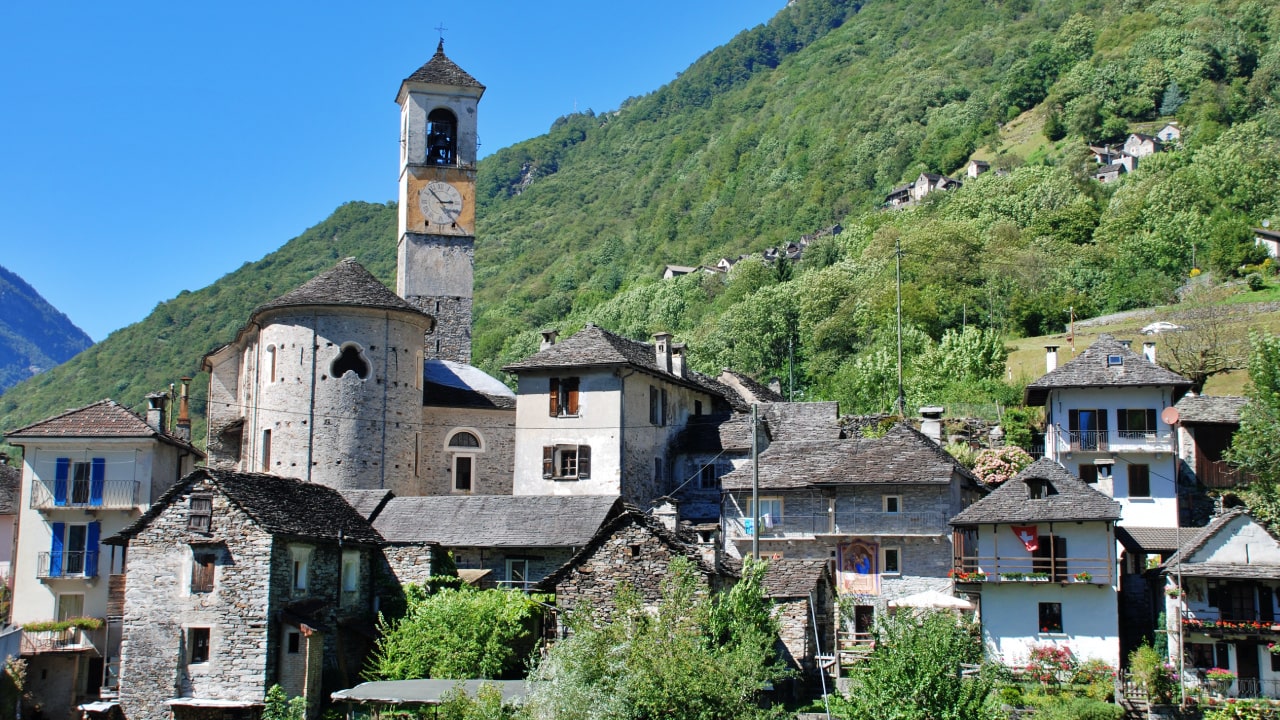 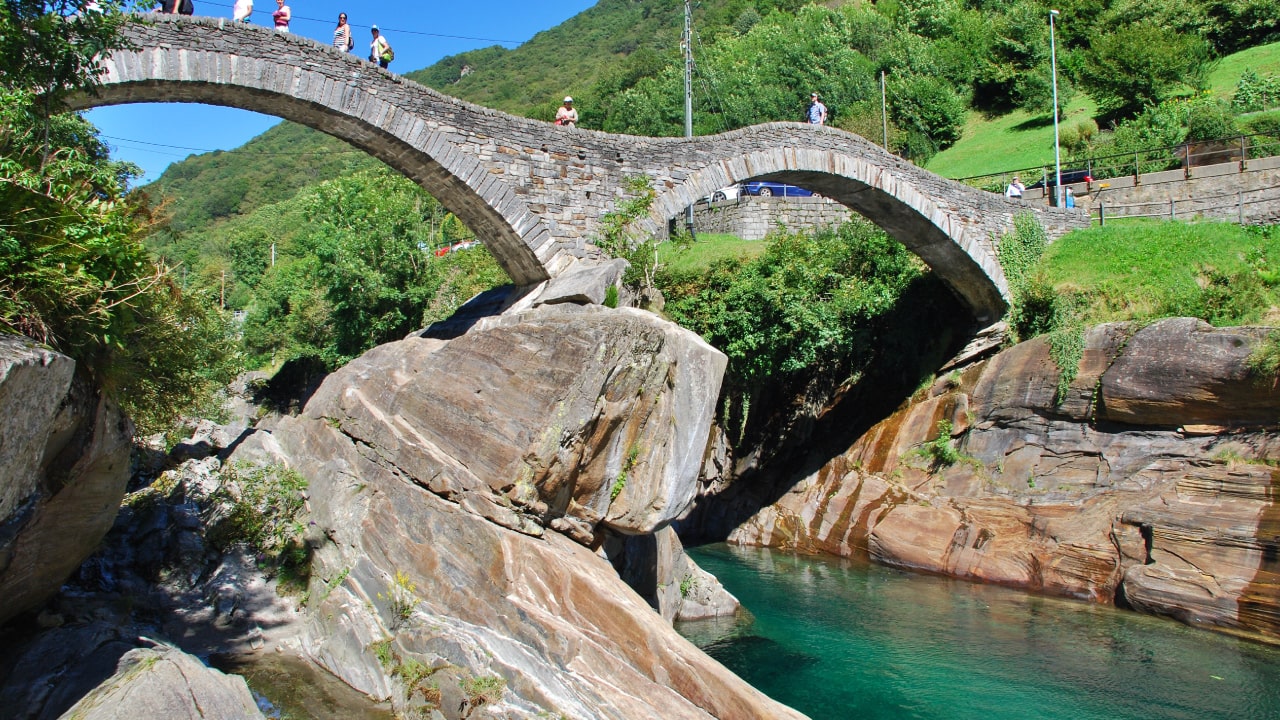 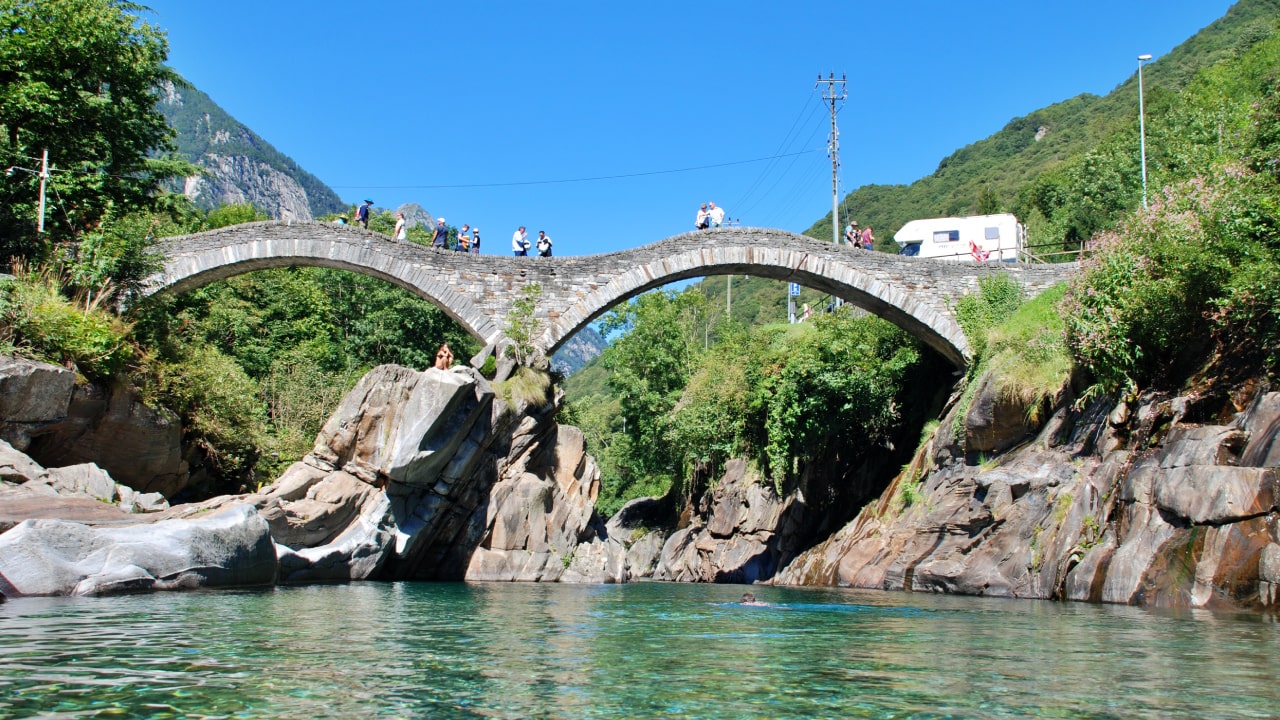 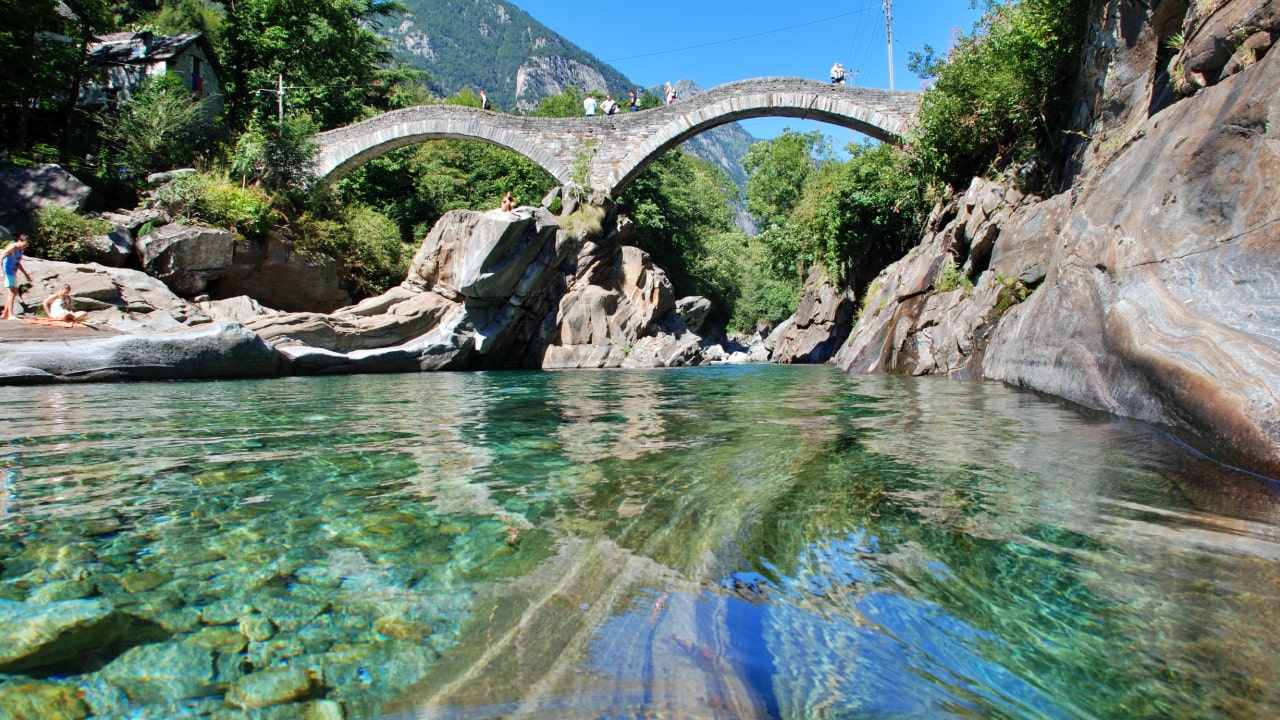 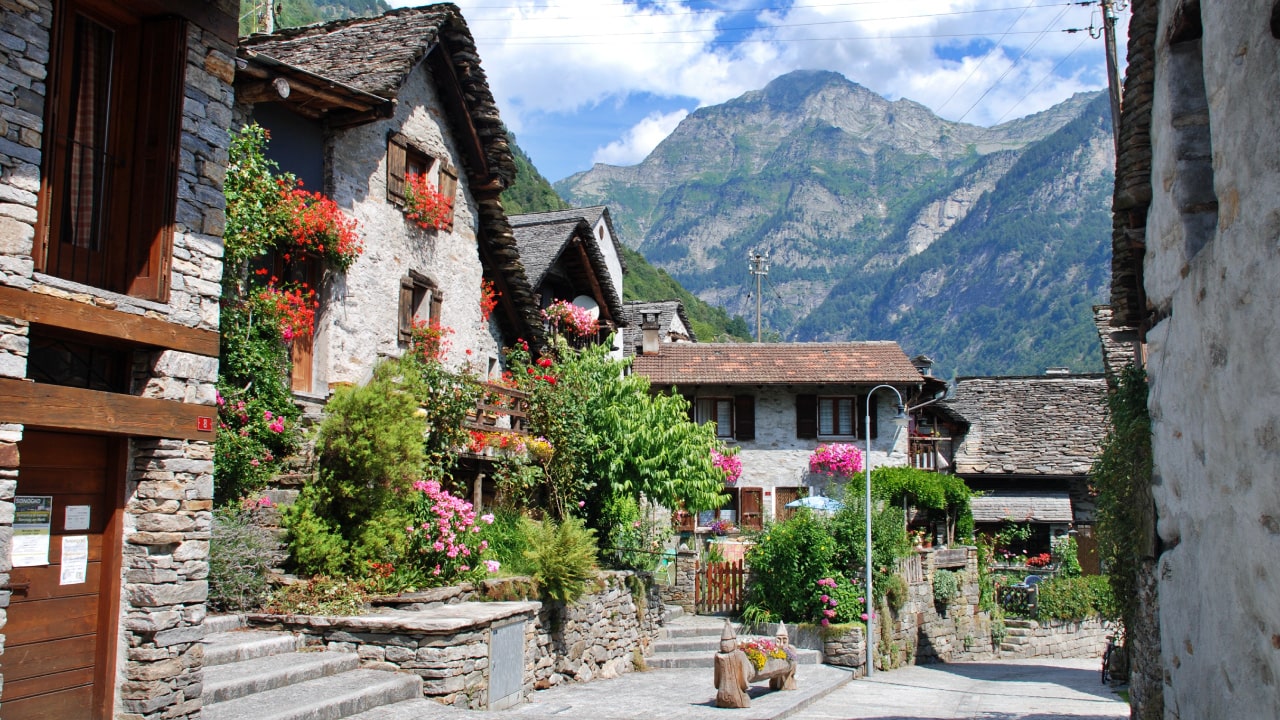 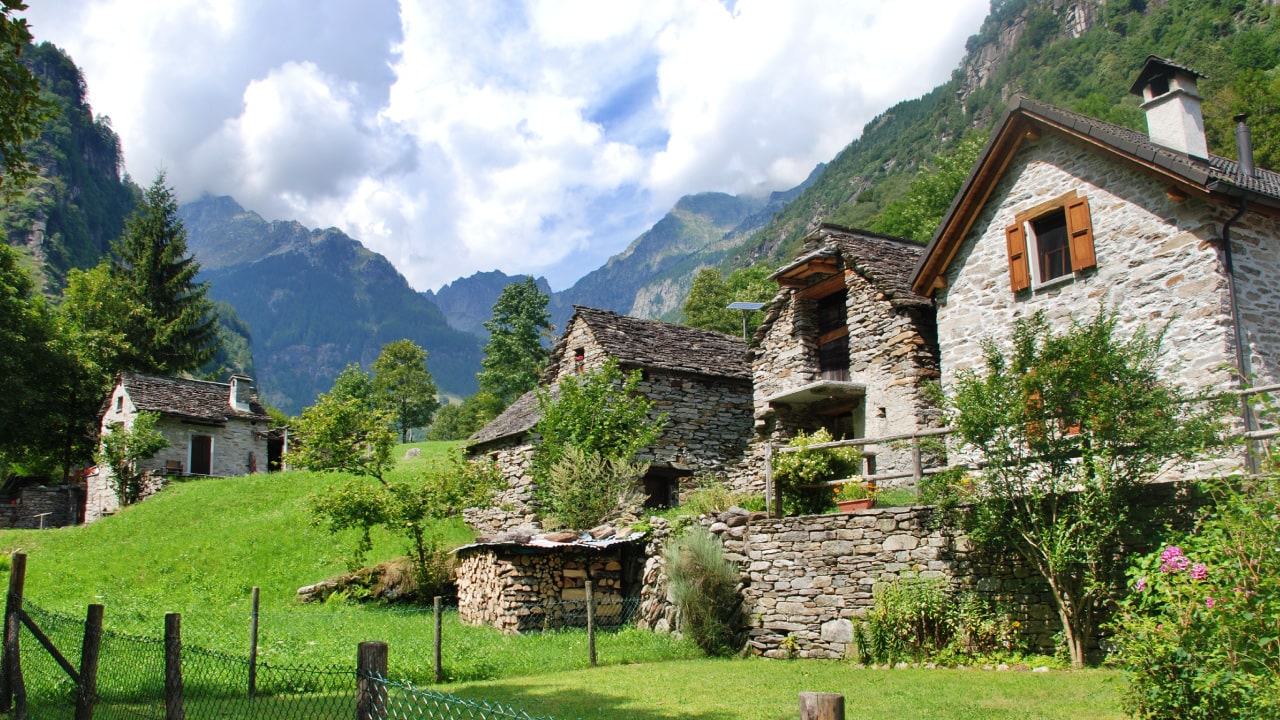 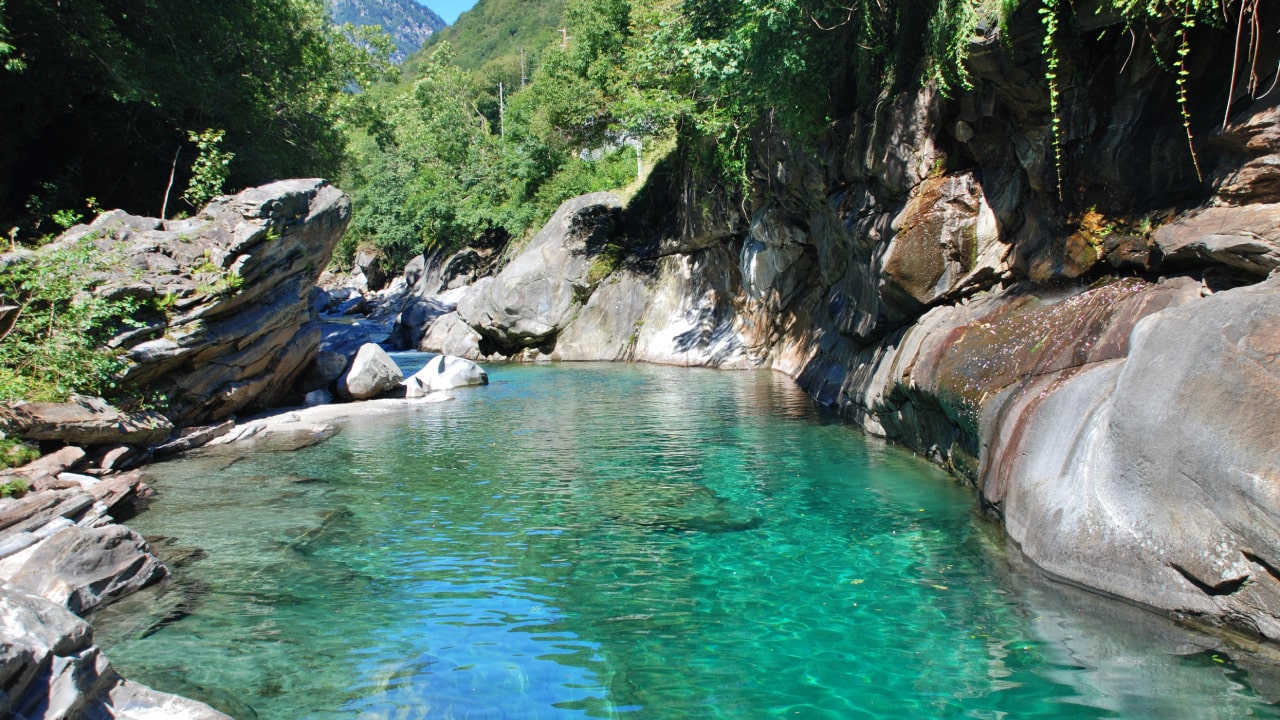 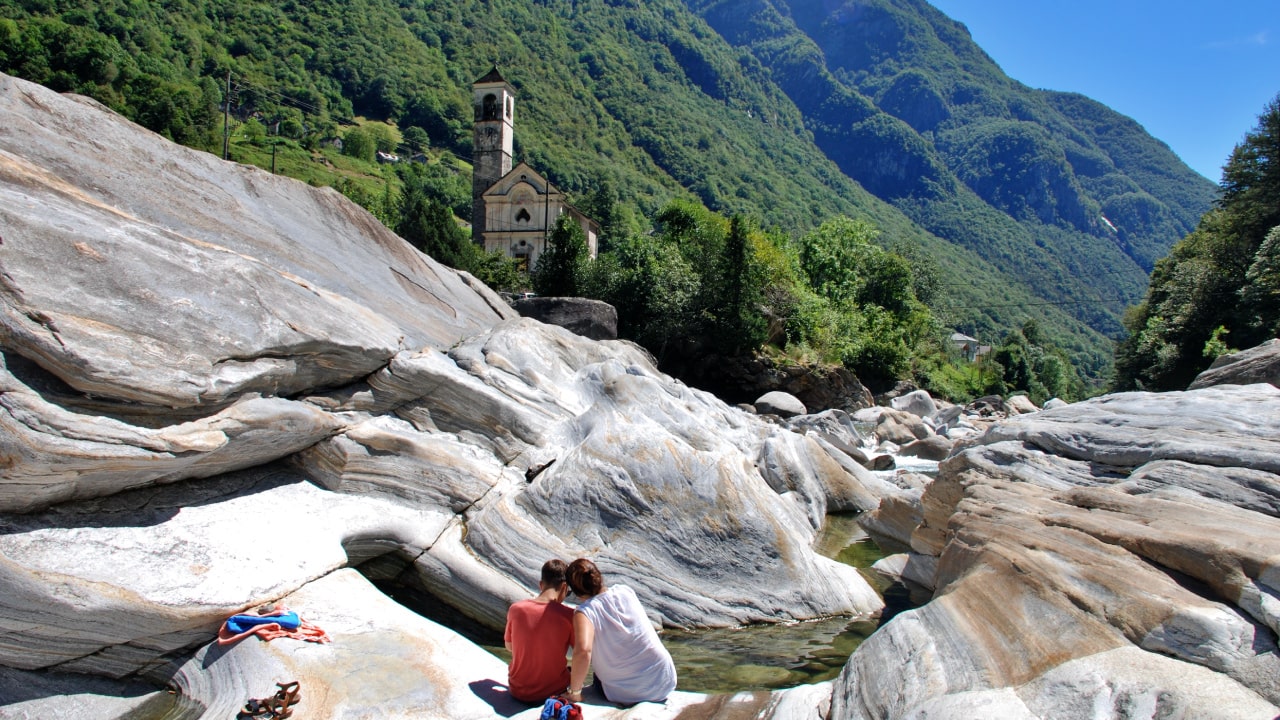 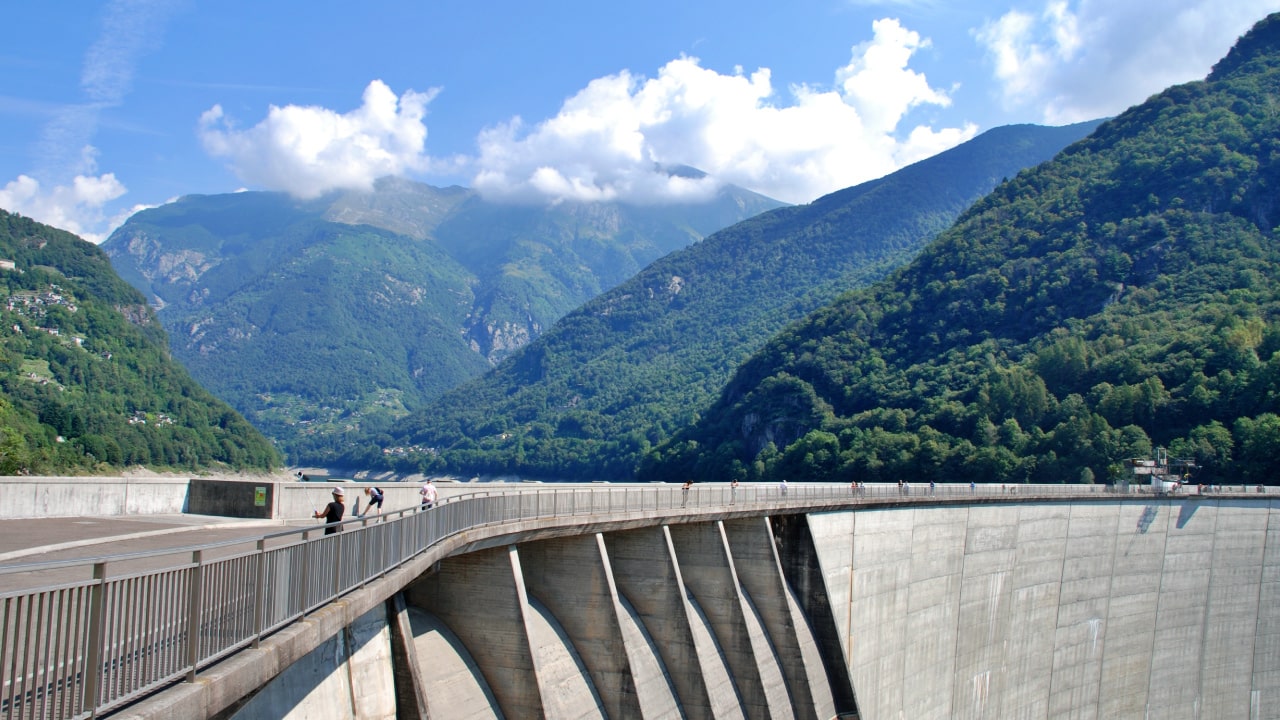 The Verzasca valley has some of Switzerland’s top attractions such as the river and the medieval bridge at Lavertezzo.

And of course many of you have seen a picture of the Vogorno Dam, where the famous opening scene of James Bond’s Goldeneye was filmed.

But you will be surprised to know that apart from these interesting visits, Verzasca is a valley of traditional villages, which give it a special charm far from the glamour and luxury of the towns of Lake Maggiore, such as Locarno or Ascona.

Route through the Verzasca Valley

From Locarno, the road leads to the Verzasca Valley. The road that enters the valley soon glimpses the river Verzasca, which will be our companion until the end of the valley at Sonogno.

In just a few kilometres, you reach the first stop on your route through the valley.

Situated at an altitude of 470 metres, it is the lowest dam in Switzerland, but the fourth with the highest wall, at 220 metres.

The wall is so steep that it was the location for the opening scene of Goldeneye, where Pierce Brosnan took an incredible bungee jump into Lake Vogorno.

Today the film has served as a lure for the brave to make this famous jump.

Apart from all the mystique of the famous agent 007, it is impressive to walk along the top of the dam and look out over that void of concrete and water that forms an overwhelming and imposing landscape.

After the dam we will pass through a village next to the road, San Bartolomeo and its beautiful church, which will give us an idea of the typical architecture of these valleys.

Shortly after this small village, a turning to the left will allow you to cross the river and climb up a narrow road to Corippo, one of the jewels of the Verzasca valley.

Corippo is known as the smallest village in Switzerland. According to wikipedia only 13 inhabitants populate this small commune located at an altitude of 563 m. It is situated on the slopes of the Verzasca valley and the houses follow the typical Ticino architecture.

Lavertezzo and the ponte dei salti

If we were short of time and had to choose one visit in the Verzasca valley, it would be Lavertezzo and its famous medieval double-arched bridge.

Four hundred years old, this architectural marvel spans the no less spectacular Verzasca river, which flows into the Vogorno dam.

if you cross the bridge you can contemplate the church of Lavertezzo from above but you need to be careful to not fall into the water, especially if you are travelling with children.

After enjoying this marvellous landscape, you can visit the beautiful church of Lavertezzo, which, like the bridge, is very beautiful and photogenic.

Sonogno, the last village in the valley

If you follow the road towards the bottom of the valley, you will pass through beautiful villages worthy of a stop, such as Frasco, Gerra and Brione. All of them have traditional architecture and a church in the centre of the village, where in summer popular festivals and dinners are held, as in the case of Brione.

After this quick stop on the road, continue on to Sonogno, where the road comes to an end and where you can visit another beautiful typical Ticino village.

Sonogno is picturesque and traditional. Its beautiful stone houses and church steeple can already be seen from the large car park at the entrance to the village. The village has been given special protection by the tourist authorities and this can be seen for example in the renewed paving of the main streets.

It is very pleasant to take a stroll through the white stone houses with dark roofs and balconies full of flowers. You can see typical elements of life in past centuries, such as the stone oven used to bake bread.

There is an asphalted road that climbs up towards the upper part of the village, and heads towards the Froda waterfall, passing first by one of the most famous grottos in the valley, where Ticino specialities are served in a rustic and traditional atmosphere and in the open air.

In half an hour you reach the waterfall, which is characterised by its lush vegetation and the natural pool formed by the falling water.

To the left there is a path that leads up to the waterfall where you can enjoy spectacular panoramic views and where you can even rest on a stone deckchair.