Things to do in Zürich 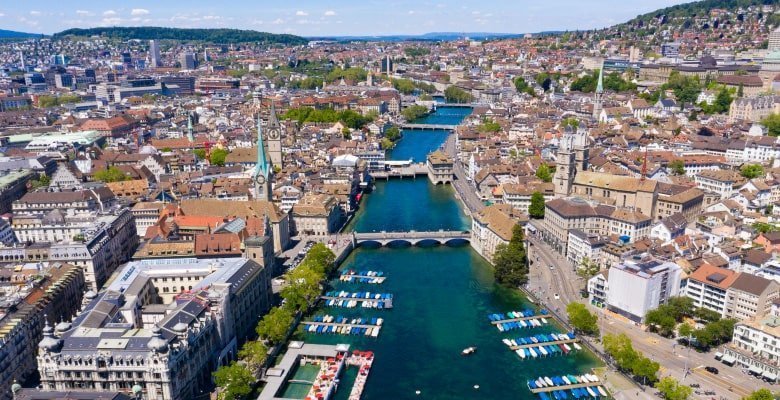 Discover "Things to do in Zürich", it's a fantastic idea for your holidays, which we have in the Swiss Experiences section and which the Swissferien team advises you not to miss.

Zürich is the financial and cultural heart of the country, it has a rich historical-cultural heritage in a beautiful old town and numerous tourist attractions such as museums, art galleries, parks, churches and viewpoints that worth a visit.

The economic capital of Switzerland is much more than one of the main financial centres of the world as from the end of the 20th century it has reinvented itself becoming a vital, cultural and avant-garde city.

Zürich is located on both sides of the river Limmat, which flows into Lake Zurich and has the snow-covered Alps as a backdrop, making it impossible to escape the magic of the famous mountain range.

We have compiled a list of sights in Zürich that you should not miss.

1. The churches of Fraumünster and St Peter’s

On the West bank of the river are two of Zurich’s most important buildings: the Fraumünster Church with its stylish form, beautiful stained glass windows by Marc Chagall and large windows by Alberto Giacometti, and St Peter’s Church with its impressive 8.7 m diameter clock embedded in its tower, one of the largest in Europe.

The most commercial part of Zürich is also on the West bank of the Limmat, which is reflected in Bahnhofstrasse, the commercial street par excellence in Switzerland. Here you will find the most important banks, jewellers, chocolate shops, confectioners and fashion shops, which sum up the opulence and high standard of living of the city and the country in general.

In contrast to Zürich’s commercial artery, there is Ausgustinergasse, located in the heart of the old town. This secluded passage with its cobbled floor and colourful houses is full of cafés, art galleries and craft workshops that make your visit a must.

From the Quaibrücke bridge you can contemplate another wonderful view of the city: the lake and the mountains. This is not the only one: six other bridges connect West and East shores, the latter being the site of Zurich’s cathedral, the Grossmünster. It is an imposing building with two magnificent twin towers, one of which can be climbed to enjoy the sweeping panorama of the city and its magnificent natural surroundings. The building houses a Romanesque crypt, Otto Münch’s bronze doors and the Museum of the Reformation in the cloister.The genius Alberto Giacometti also left his mark on the magnificent cathedral.

The walk along the streets on the western shore of the lake is dotted with numerous cafés and eateries through which many 20th century intellectuals passed, such as Einstein, Lenin, Mann, Tzara, Brecht and Joyce, who wrote the first chapters of his masterpiece Ulysses here.

But if Zurich stands out at all, it is because of its status as art and avant-garde, which has developed in this direction in recent decades. The district of Zurich West, former industrial area of the city, full of factories and smoking chimneys is nowadays a place full of theatres, dance centres, restaurants, art galleries or discos, promoted by a modern and enterprising youth, which has finally become one of the great attractions of today’s Zurich.

Take a leisurely stroll under the 36 arches of the former railway viaduct, a shopping paradise. You can also visit the Prime Tower, the second highest building in Switzerland, with its extraordinary glass facade and a charming restaurant on the 35th floor from which you can enjoy an impressive panoramic view of the city, the lake and the surrounding mountains ; the Freitag Flagship Store, also known as the “bonsai skyscraper”, an innovative building made of stacked freight containers where one can find a multitude of recycled products, such as the famous Freitag bags; finally, you can relax on the sunny terrace of the Frau Gerolds Garten, which enjoys a fantastic view of the distant peaks.

If Zürich is a reference in avant-garde aesthetics, it is no less so as a city of art and culture. The Swiss National Museum next to the main railway station, for example, is impressive both for its strongly medieval exterior and for its interior where its rooms recreate the history of the Swiss nation from prehistory to the present day.

The Kunsthaus, the city’s other major museum, is one of the most important museums of contemporary art in the world. It houses works by Picasso, Monet, Chagall, Bacon, a large Giacometti collection and the largest Munch collection outside Norway as well as works by key figures of the expressionist movement, such as Pollock and Rothko or pop art.

Zürich is enchanting at any time of year: in winter the atmosphere is magical and in summer the city’s residents rush to enjoy the pleasant surroundings, whether bathing in one of the lake’s natural pools or cycling and jogging along the paths signposted along the shores.

As if that was not enough, its privileged geographical location puts it very close to wonders such as: the Rhine Falls in Schaffhausen just 50 km away, Lucerne 60 km away, or the delicious and medieval Stein am Rhein, 55 km and one hour’s drive away.

If you have time you can also take a day trip to some of the wonders of Switzerland.

The tours will take you to mountain peaks of over 3,000 metres, to green valleys with small mountain villages and to some of the most beautiful towns in Switzerland.

Day trip to the Titlis

The city is very well connected to other tourist attractions in Switzerland, thanks to organised excursions that allow you to discover the unforgettable wonders of the Swiss Alps, such as the mythical trip to Titlis, where you can ride up in a rotating cable car and cross the suspension bridge at the highest altitude in Europe.

Day trip to the Jungfraujoch – the top of Europe

Another classic is a visit to the Alpine resort on the Jungfraujoch, Top of Europe, a must if you want to see the Swiss Alps.

There are many more activities like visiting beautiful Lucerne, climbing Mount Pilatus or travelling to Interlaken and Grindelwald. Here you can choose the one you like best.